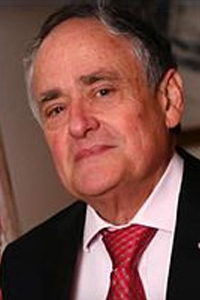 Prof. Dr. Herbert (Bob) Pinedo is an internationally recognized oncologist based in the Netherlands and Curacao. Dr. Pinedo is Professor-Emeritus of Medical Oncology at the Free University of Amsterdam (VUMC), currently serving as a consultant to the Board of VUMC. Since 2008, he has been a visiting Professor at Johns Hopkins University and the Technical University of Twente and since 2009, he has chaired the Prevention Foundation of Curaçao. From 1979 to 2005, he served as Chief of the VUMC Department of Oncology and from 2003 to 2005, was president and chair of the board of VU Cancer Center Amsterdam. From 2004 to 2009, he served as vice-chair of the Netherlands Organization for Health Research and Development.

Over his career, he has served on boards and committees of many European and American organizations, including 25 years on the Board of the Dutch Cancer Society. He founded the New Drug Development Office – Oncology, which coordinated early clinical trials with anti-cancer agents, internationally. He was the inaugural President of the Federation of European Cancer Societies and is a past President of the European Society of Medical Oncology (ESMO). He has served on numerous committees of the American Association of Cancer Research (AACR) and the American Society of Clinical Oncology (ASCO) and on scientific advisory boards of cancer institutes as well as companies, including Bristol Myers Squibb (Europe). He is a consultant to Spectrum Pharmaceuticals and a past director and consultant of OSI Pharmaceuticals, Inc.

Dr. Pinedo is a prolific physician-scientist with over 700 peer-reviewed full publications and more than 120 book chapters, invited papers and proceedings with a focus on translating leading-edge scientific concepts into early clinical trials and their development through approval.

In 2006, in his honor, The Society of Translational Oncology established the Pinedo Prize, awarded by the Royal Netherlands Academy of Arts and Sciences for excellence and commitment to advancing cancer patient care and outcomes. Dr. Pinedo has received many international awards including the prestigious Josef Steiner Award (1995), the Spinoza Award (1997) and ASCO David Karnofsky Award (2014). He is a member of the Royal Netherlands Academy of Arts and Sciences and has been decorated by Her Royal Majesty Queen Beatrix of the Netherlands with the prestigious Knight in the Order of the Netherlands Lion and Commander in the Order of Orange-Nassau. He is still practicing medical oncology today.

Back to Management team